Christmas is almost upon us, and as a Christian I put the most emphasis on the birth of Jesus. I love the decorations and the presents and the food, especially with children around, but we should remember the event that started it all. With that in mind, it occurred to me to look into how science fiction has treated religion. 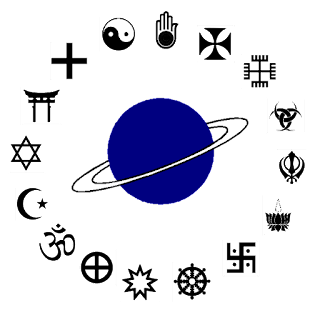 I read voraciously and mostly science fiction, and I couldn’t think of many books that featured religion of any kind. There are books like Dune, Game of Thrones and His Dark Materials which have a strong religious presence, but an invented one, an usually malevolent.

There aren’t many that deal with real religion as we know it today. I recently read one about a man who felt the calling to be a rabbi but ended up as a starship captain – but I can’t remember what it was called! Typical! There is also a sub genre of Christian science fiction.

I found an article on World Religion News on What Is Religion’s Place in Science Fiction? That makes the point:

Science fiction seems to return to the idea that “religion is the opiate of the masses.” That while religion was necessary for early binding society, as technology and society move forward, religion becomes less and less relevant.

An old article on the Guardian website, What Can Science Fiction Tell Us About God? said:

A lot of the founding parents of SF were slightly dogmatic agnostic progressives who generally saw religion as obscurantist and reactionary; if you are writing technophilic social satire, cardinals and high priests are almost a default set of villains. More interestingly, religion offered both gaudy backdrops for stories and interesting ideas from which stories could grow.

Do you agree? Maybe science fiction as a genre is not an appropriate place to discuss religion. NASA spent over $1m to look into how Earth’s religions would cope with the discovery of aliens. The conclusion was that most of the major religions would have a serious problem.

If you’re interested in how science fiction books have dealt with various aspects of religion, Wikipedia has a detailed List of Religious Ideas in Science Fiction. It makes fascinating reading and may give you some pointers to books you might want to read.

In any case, may I wish you a very merry Christmas and a blessed one too. Stay safe.

Ann Marie Thomas is the author of four medieval history books, a surprisingly cheerful poetry collection about her 2010 stroke, and the science fiction series Flight of the Kestrel. Book one, Intruders, and book two Alien Secrets, are out now. Follow her at http://eepurl.com/bbOsyz
Posted by Ann Marie Thomas at 22:36