There was a time when the kings of England ruled a large part of France. Or rather I should say the Angevins of France ruled England as well. Henry II was the founder of the Plantagenet dynasty of English kings. The last of the line was Richard III whose body was dug up in a Leicester car park in 2012. Henry was also the overlord of the Angevin empire — he was lord of more land in France than the King of France himself, Louis VII. His territory stretched all the way from the Scottish border and Ireland to the Pyrenees mountains south of France. 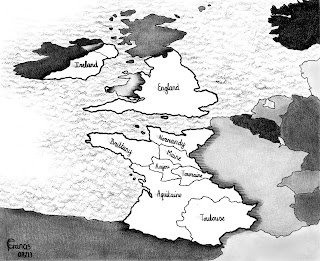 As you can see from the illustration, as well as England and a large chunk of Ireland, the Angevins ruled Normandy, Brittany, Maine, Anjou, Touraine, Aquitaine and Toulouse. It is from Anjou that the Angevins got their name. Henry II was married to Eleanor of Aquitaine, a powerful woman in her own right. They had four sons, Henry, Richard, Geoffrey and John.
In an attempt to spread the responsibility for control of his vast lands and to prevent war between his sons after his death, Henry divided the territory between them and had his eldest son crowned during his lifetime, on 24 May 1170. His son was referred to as the Young King and Henry as the Old King, since they both had the same name. Richard was given Gascony and Poitou and inherited his mother Eleanor's territory of Aquitaine. Geoffrey was given Brittany. Henry hoped they would rule the empire as a friendly coalition.

However, the move made his three older sons long for power sooner and, encouraged by their mother, they continuously rebelled and tried to seize territory by force. They were supported by several of the English barons and King Louis of France, Henry's old enemy.

Henry and Geoffrey died before they could become king. Richard became King Richard the Lionheart, but although he has an impressive legend, he actually spent only about 6 months of his 10 year reign in England and never learned to speak the language. When Richard was killed, John took the throne.

The Angevin kings were historically vassals of the king of France, though they claimed to rule in their own right. The King of France was continually trying to bring them to heel, either by direct conquest or by subverting their vassals. So there was a constant battle to keep power. Lands were given to people as rewards, for favour, or in an attempt to balance power so no one vassal held too much land.

John went from being the youngest son, expecting nothing and nothing expected of him, to King of England and the Angevin empire. His older brothers, and to some extent his father, had set him a bad example of how to be a king. It needed firm control, shrewd distribution of power to the right men in the right places, and cunning to play the political games. None of which John had. During his reign all the territories in France were lost.

I wonder what life would have been like if John hadn’t lost the lands in France?

Ann Marie Thomas is the author of four medieval history books, a surprisingly cheerful poetry collection about her 2010 stroke, and the science fiction series Flight of the Kestrel. Book one, Intruders, and book two Alien Secrets, are out now. Follow her at http://eepurl.com/bbOsyz
Posted by Ann Marie Thomas at 23:16