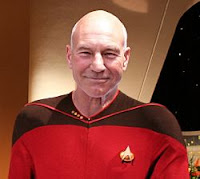 And the replicator dutifully produced not just the tea but the cup holding it.

In Star Trek replicators mostly produced food but later on could provide almost anything small enough to fit into the microwave-sized machine. Replicators solved two problems at once. There was no need to carry any more than emergency supplies (in case the replicators broke) and the ship’s waste products were efficiently recycled.

This was a development from transporter technology. A transporter dematerialises a person into energy, beams the energy to another site, and then reconstitutes them. A replicator takes energy and constitutes it into anything it has the programming for.

But could we create a replicator?

Back in 2014 the BBC Newsbeat website reported that Nestle’s Health Institute were working on a project to create food at the press of a button tailored to a person’s nutritional needs. So many people are deficient in things like vitamin D or iodine, and this would produce the requested food but with the supplements added.

In 2019 Science Alert reported that scientists had built a real Star Trek replicator that builds objects with light. The objects are small and created from synthetic resin that solidifies in certain wavelengths of light. Follow the link for a video of it actually working.

This is really the next step in 3D printing. Instead of laying down a substance in layers and gradually building up, the object is created all at once by a laser. But it will be a long time before it can produce food.

Ann Marie Thomas is the author of four medieval history books, a surprisingly cheerful poetry collection about her 2010 stroke, and the science fiction series Flight of the Kestrel. Book one, Intruders, and book two Alien Secrets, are out now. Follow her at http://eepurl.com/bbOsyz
Posted by Ann Marie Thomas at 18:39