This month’s illustration from Alina, The White Lady of Oystermouth is a dark and brooding Oystermouth Castle, symbolic of the tempestuous times that the Lordship of Gower went through. 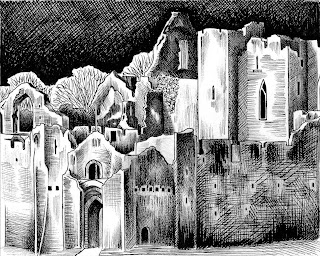 Alina lost everything in the barons rebellion and ended up in the Tower of London. Not only that, but she was given into the care of Hugh Despenser the Elder, the father of the king’s favourite. He gave her a hard time and she had to give him the only inheritance remaining to her: the Sussex estates, including Bramber, that she had from her father. Her son John was permitted to inherit the Mowbray estates.Edward II and Hugh the Younger fled from Queen Isabella and her army and were eventually captured, as was Hugh the Elder. The two Hughs were brutally executed (read my book if you want the details). Edward II was persuaded to abdicate in favour of his young son, who became Edward III, with Isabella and Roger Mortimer as regents.

Alina’s father, William de Braose, became increasingly frail and senile. He gave up almost everything in a frantic attempt to achieve her freedom. He died in 1326, and never saw her free. With his death, the de Braose line ended. Alina was eventually freed in 1327, when Edward III became king, and the sentence on her husband was reversed at the same time. She was thirty six and her son John was seventeen.

The rebel barons had their lands that had been confiscated returned to them, but Alina was not entitled to her lands because of the shenanigans of her father William. However, the new king took pity on her and gave her the Lordship of Gower. The gift was legalised on 1st March 1327. 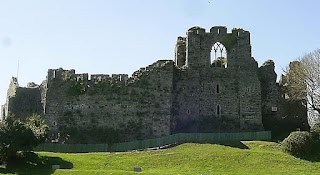 Within a year she married a man she met in the Tower, Richard de Peshale, and they lived in Oystermouth Castle. Legend has it that the chapel block was built on Alina's instructions.

Ann Marie Thomas is the author of four medieval history books, a surprisingly cheerful poetry collection about her 2010 stroke, and the science fiction series Flight of the Kestrel. Book one, Intruders, and book two Alien Secrets, are out now. Follow her at http://eepurl.com/bbOsyz
Posted by Ann Marie Thomas at 20:57