In my science research, I’m looking at the book A Brief History of the Future, and seeing what the author predicts to be developed first. By 2046 he predicts there will be handheld devices for DNA sequencing.

So I Googled it, and just like last week, found technology had already caught up with it. 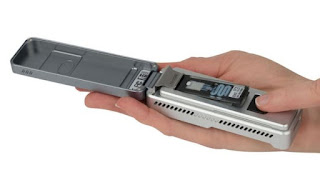 It’s called a MinION, which reminds me of the little yellow creatures in the Despicable Me films, but maybe it’s pronounced differently. The device, made by Oxford Nanopore, is a little bigger than a mobile phone and can sequence much longer strands of DNA.


The original sequencing of the human genome took over a decade and cost over $500m. Modern day sequencing involves chopping the DNA into fragments, sequencing them and then piecing them together again, often with missing pieces and confusing pieces which are very similar. But this machine sequences long chains in their entirety, and will do so in the field in a much shorter time. 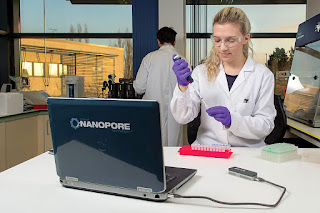 This research was carried out by scientists from the Universities of Nottingham, Birmingham and East Anglia in collaboration with researchers in the US and Canada.

The machine has already been used in West Africa to track the Ebola virus and in Brazil with the Zika virus. A biotech company saved about $100,000 using this machine to detect contamination in a batch of drugs in real-time and save the batch. So the price of $1000 for a machine was well worth the expense.


The ability for any lab to sequence the genome of a pathogen quickly and cost-effectively is a game-changer for public health. (Genetic Engineering & Biotechnology News)

Ann Marie Thomas is the author of four medieval history books, a surprisingly cheerful poetry collection about her 2010 stroke, and the science fiction series Flight of the Kestrel. Book one, Intruders, and book two Alien Secrets, are out now. Follow her at http://eepurl.com/bbOsyz
Posted by Ann Marie Thomas at 21:27