In my history of science fiction series, we have reached the Golden Age. We’ve looked at books and films, but this is when science fiction arrived on television. Last week was all about Quatermass. This week I’m looking at scifi serials, many based on comic strips.

The Buck Rogers character was originally in the novel Armageddon 2419AD by Philip Francis Nowlan, and was made into a cartoon strip in newspapers, first appearing in January 1929. It became a radio series in 1932, the first science fiction on radio.

The story of how Buck Rogers ends up in the 25th century has changed over time, but in each case he was put into suspended animation by an accident and not found for over 400 years. His ‘old world’ skills come in very useful in the 25th century, who are too reliant on computers. 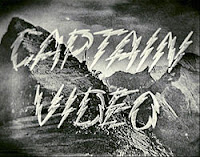 This science fiction television series started in 1949. It originally went out live, five or six days a week, but was later filmed. Originally aimed at children, the budget was very low, but many adults became fans too. One researcher claimed there were over 1500 episodes, but only a handful survive.

The series, set in Earth's distant future, tracked the adventures of a group of fighters for truth and justice, known as The Video Rangers. They were led by Captain Video and operated from a secret base on a mountaintop. Their uniforms resembled U.S. Army surplus with lightning bolts sewn on. Captain Video had a teenage companion known only as The Video Ranger. The Captain received his orders from the Commissioner of Public Safety, whose responsibilities took in the entire solar system as well as human colonies on planets around other stars. 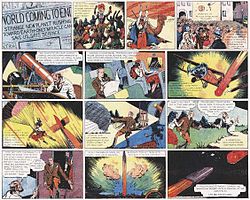 The Flash Gordon comic strip was first published in January 1934, inspired by and created to compete with the already established Buck Rogers adventure strip. It too led to several series on television and several films. Flash Gordon is regarded as one of the best illustrated and most influential of American adventure comic strips.

Flash Gordon was featured in three serial films starring Buster Crabbe: Flash Gordon (1936), Flash Gordon's Trip to Mars (1938), and Flash Gordon Conquers the Universe (1940). Each of these were made into feature-length films.

On television, the first was a 1954–55 live-action series which ran for 39 episodes. An animated series was made and shown in 1979-80, and there have been several other animations and a live action film since.

The comic strip follows the adventures of Flash Gordon, a handsome polo player and Yale University graduate, and his companions Dale Arden and mad scientist Dr. Hans Zarkov. The story begins with Earth threatened by a collision with the planet Mongo. Dr. Zarkov invents a rocket ship to fly into space in an attempt to stop the disaster. Half mad, he kidnaps Flash and Dale and they travel to the planet. Landing on the planet, and halting the collision, they come into conflict with Ming the Merciless, Mongo's evil ruler.


[adapted from the Science Fiction Encyclopedia and Wikipedia]

Ann Marie Thomas is the author of three medieval history books, a surprisingly cheerful poetry collection about her 2010 stroke, and the science fiction series Flight of the Kestrel. Book one, Intruders, is out now. Follow her at http://eepurl.com/bbOsyz
Posted by Ann Marie Thomas at 16:16