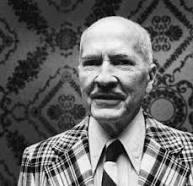 Heinlein became one of the first science fiction writers to break into mainstream magazines such as The Saturday Evening Post in the late 1940s. He was one of the best-selling science fiction novelists for many decades, and he, Isaac Asimov, and Arthur C Clarke are often considered the "Big Three" of science fiction authors.

Heinlein turned to writing in order to pay off his mortgage. His first published story, Life-Line, was printed in the August 1939 issue of Astounding Science-Fiction. Originally written for a contest, it was instead sold to Astounding for significantly more than the contest's first-prize payoff.

A notable writer of science fiction short stories, Heinlein was one of a group of writers who came to prominence under the editorship of John W Campbell, Jr. at his Astounding Science Fiction magazine—though Heinlein denied that Campbell influenced his writing to any great degree.

In the 1950s he was a leader in bringing science fiction out of the low-paying and less prestigious "pulp ghetto". Most of his works, including short stories, have been continuously in print in many languages since their initial appearance and are still available as new paperbacks decades after his death.

Within the framework of his science fiction stories, Heinlein repeatedly addressed certain social themes: the importance of individual liberty and self-reliance, the obligation individuals owe to their societies, the influence of organized religion on culture and government, and the tendency of society to repress nonconformist thought. He also speculated on the influence of space travel on human cultural practices.

In his fiction, Heinlein coined terms that have become part of the English language, including "grok", "waldo", and "speculative fiction", as well as popularizing existing terms like "TANSTAAFL" [there ain’t no such thing as a free lunch], "pay it forward", and "space marine". He also anticipated mechanical Computer Aided Design with Drafting Dan and described a modern version of a waterbed in his novel The Door into Summer, though he never patented or built one. In the first chapter of the novel Space Cadet he anticipated the cell-phone, 35 years before Motorola invented the technology. Several of Heinlein's works have been adapted for film and television.

Heinlein published 32 novels, 59 short stories, and 16 collections during his life. Four films, two television series, several episodes of a radio series, and a board game have been derived more or less directly from his work.

In his lifetime, Heinlein received four Hugo Awards, for Stranger in a Strange Land, The Moon is a Harsh Mistress, Starship Troopers, and Double Star, and was nominated for four Nebula Awards, for Stranger in a Strange Land, Friday, Time Enough for Love, and Job: A Comedy of Justice. He was also given five posthumous Hugos, for Farmer in the Sky, Destination Moon, If This Goes On, The Roads Must Roll, and The Man Who Sold the Moon.

In addition, fifty years after publication, five of his works were awarded "Retro Hugos"—awards given retrospectively for works that were published before the Hugo Awards came into existence.The Science Fiction Writers of America named Heinlein its first Grand Master in 1974, presented 1975.

Quote from SF-Encyclopedia
Though not sf's finest sf writer in strictly literary terms, Heinlein's grasp of narrative strategy was unparalleled in the field, and his presentation of the future as a venue where people actually lived was innovative and definitive; his pre-eminence from 1940 to 1960 was both earned and unassailable. In a style which exuded assurance and savvy, his early writing blended slang, folk aphorism, technical jargon, clever understatement, apparent casualness, a concentration on people rather than gadgets, and a sense that the world described was real; it was a kind of writing able to incorporate the great mass of necessary sf data necessary without recourse to the long descriptive passages and deadening explanations common to earlier sf, so that his stories spoke with a smoothness and authority which came to seem the very tone of things to come. His characters were competent men of action, equally at home with their fists and a slide-rule (see Edisonade) and actively involved in the processes and procedures (political, legal, military, industrial, etc.) which make the world turn. Described in tales whose apparent openness concealed very considerable narrative craft and cunning, these characters seemed genuinely to inhabit the worlds of tomorrow. By the end of his first three years of writing, Heinlein had domesticated the future. For the next half a century he was the father – loved, resisted, emulated – of the dominant US form of the genre.

The Heinlein Society is an organisation dedicated to “paying it forward” in his honour.

Ann Marie Thomas is the author of three medieval history books, a surprisingly cheerful poetry collection about her 2010 stroke, and the science fiction series Flight of the Kestrel. Book one, Intruders, is out now. Follow her at http://eepurl.com/bbOsyz
Posted by Ann Marie Thomas at 19:19