Lost Horizon was directed by Frank Capra and starred Ronald Coleman. The film had the largest amount ever allocated to a project up to that time, yet exceeded its original budget by more than $776,000, and it took five years for it to earn back its cost. It created a serious financial crisis for Columbia Pictures.

Plot
Robert Conway is a writer, humanitarian, diplomat, and former military man, all of which have made him a public hero. But he is remarkably unfulfilled in his life, something he does not tell anyone. On March 10, 1935, he is in Baskul, China, where a violent revolution is taking place. It is his job to evacuate the ninety British subjects in the area, before he himself heads back to London to become British Foreign Secretary.

He is on the last flight out, with his overly pragmatic brother George Conway, paleontologist Alexander Lovett, secretive Henry Barnard, and terminally ill American Gloria Stone as his fellow passengers. What they are initially unaware of is that the plane has been hijacked, and eventually crash lands high in the Himalayas, killing the hijacking pilot.

But instead of what seems a probable death for them, they are rescued by a band of men who take them back to their community hidden behind the mountains, a seemingly Utopian community named Shangrila, where the overall belief is to be kind. A peaceful and plentiful place without illness, war or any type of dispute, aging is also a seemingly unknown concept. Each of the five has different feelings about their new sanctuary, where they eventually learn they were not brought by accident.

On one end of the spectrum is George, who does whatever he can to get back to civilization as he knows it, despite the probable hardship of doing so, especially since there is no means of communication in and out. He believes what they have been told are all lies and that they are being held prisoners against their will.

On the other end is Bob, who believes that Shangrila is exactly what he's been looking for in life. With no proof one way or another, the five have differing views of staying in Shangrila forever or trying to make their way out. It may be not until they receive that "proof" that a definitive decision can be made, but by that time it may be too late for some.

As Robert learns the true secret of Shangri-La and his reason for being there, he is faced with having to leave in order to protect his brother who will be setting off with or without him. 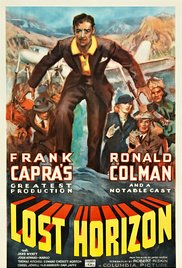 Award
In 2016, the film was selected for preservation in the United States National Film Registry by the Library of Congress as being ‘culturally, historically, or aesthetically significant’.

[adapted from IMDb and Wikipedia]


Ann Marie Thomas is the author of three medieval history books, a surprisingly cheerful poetry collection about her 2010 stroke, and the science fiction series Flight of the Kestrel. Book one, Intruders, is out now. Follow her at http://eepurl.com/bbOsyz
Posted by Ann Marie Thomas at 19:58