Writers Should Be Readers

I hope you had a wonderful Christmas, and I wish you a happy and productive New Year. May 2017 be the year that you finally get that book published, or whatever your dream is. I'm doing some serious reviewing and planning, so my goals are more achievable. I wrote recently about Strategic Planning for Writers - I heartily recommend it.

As a writer, it's important to be a reader, for lots of reasons. You need to be more aware of what's out there in your genre and you will be a better writer if you're steeped in good writing that you've read. I read every night in bed, sometimes for too long! I am a voracious reader, and Goodreads just sent me my year in review. 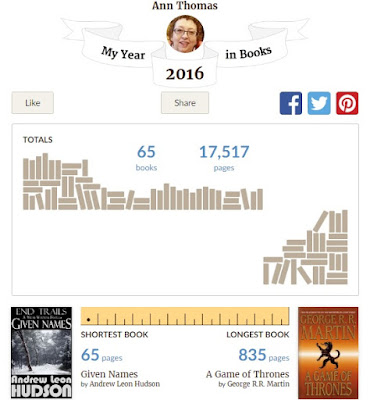 In your planning for next year, make sure to plan to read. I read lots of science fiction, which is my main genre, and some fantasy, but a few other types of books that take my fancy. I also read books about writing, from which I make notes to refer to when I'm editing.

So here are some recommendations from the 65 books I read this year:


And some writing books:

I would love to know when you read any of these, or if you have any recommendations.

Ann Marie Thomas is the author of three medieval history books, a surprisingly cheerful poetry collection about her 2010 stroke, and the science fiction series Flight of the Kestrel. Book one, Intruders, is out now. Follow her at http://eepurl.com/bbOsyz
Posted by Ann Marie Thomas at 19:23