It is strangely appropriate that in my research into the history of science fiction I should have reached Things To Come on New Years Eve! 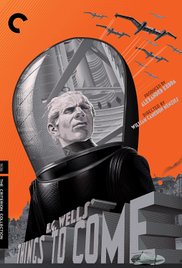 H G Wells' Things to Come, as it was called in promotional material, was a 1936 British black-and-white science fiction film from United Artists, produced by Alexander Korda, directed by William Cameron Menzies, and written by H G Wells.

The dialogue and plot were devised by H. G. Wells as ‘a new story’ meant to display the ‘social and political forces and possibilities’ that he had outlined in his 1933 story The Shape of Things to Come, a work he considered less a novel than a ‘discussion’ in fictional form that presented itself as the notes of a 22nd-century diplomat. The film was also influenced by previous works, including his 1897 story A Story of the Days to Come and his 1931 work on society and economics, The Work, Wealth and Happiness of Mankind. In the British city of Everytown, businessman John Cabal cannot enjoy Christmas Day, 1940, with the news everywhere of possible war. An aerial bombing raid on the city that night results in general mobilisation and then global war.

The war continues into the 1960s, long enough for the people of the world to have forgotten why they are fighting. Humanity enters a new Dark Age. The world is in ruins and there is little technology left, apart from the firearms used to wage war. In 1966 a biological weapon called the ‘wandering sickness’ is used by the unnamed enemy in a final desperate bid for victory. The plague kills half of humanity and extinguishes the last vestiges of central government.

On May Day 1970, a sleek, futuristic aeroplane lands outside of what remains of Everytown. The sole pilot, John Cabal, emerges and proclaims that the last surviving band of ‘engineers and mechanics’ have formed a civilisation of airmen called ‘Wings Over the World’. They are based in Basra, Iraq and have renounced war and outlawed independent nations.

Gigantic aircraft arrive over Everytown and saturate its ruins and population with sleeping gas globes. The people awaken shortly thereafter to find themselves under the control of the airmen of Wings Over the World.

A montage follows, showing decades of technological progress, beginning with Cabal explaining plans for global consolidation by Wings Over the World. By 2036, mankind lives in modern underground cities, including the new Everytown.

All is not well, however. The sculptor Theotocopulos incites the populace to demand a rest from all the rush of progress, symbolised by the coming first manned flight around the Moon. They are opposed by Oswald Cabal, the head of the governing council and grandson of John Cabal. Oswald Cabal's daughter Catherine and Maurice Passworthy insist on manning the capsule. When a mob later forms and rushes to destroy the space gun, used to propel the projectile toward the Moon, Cabal launches it ahead of schedule.

Later, after the projectile is just a tiny light in the immense night sky, Oswald Cabal delivers a stirring philosophical monologue about what is to come for mankind to his troubled and questioning friend, Raymond Passworthy, the father of Maurice. He speaks passionately about progress and humanity's unending quest for knowledge and advancement as it journeys out into immensity of space to conquer the stars and beyond. He concludes with the rhetorical questions, "All the universe or nothingness? Which shall it be, Passworthy? Which shall it be? ..."

Science fiction historian Gary Westfahl has stated: "Things to Come qualifies as the first true masterpiece of science fiction cinema, and those who complain about its awkward pace and uninvolving characters are not understanding Wells's message, which is that the lives and actions of individuals are unimportant when compared to the progress and destiny of the entire human race."

I hope the things to come for you in 2017 are all good ones.

Ann Marie Thomas is the author of three medieval history books, a surprisingly cheerful poetry collection about her 2010 stroke, and the science fiction series Flight of the Kestrel. Book one, Intruders, is out now. Follow her at http://eepurl.com/bbOsyz
Posted by Ann Marie Thomas at 20:17