Metropolis was an expressionist epic science fiction drama film made in Germany in 1927. The silent film was directed by Fritz Lang and written by him and his wife, Thea von Harbou. Filming took place in 1925 at a cost of approximately five million Reichsmarks. 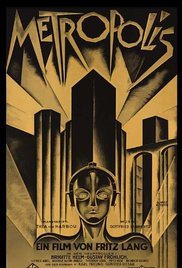 Storyline
In 2026, in the city of Metropolis, wealthy industrialists reign from high-rise tower complexes, while underground-dwelling workers toil to operate the machines below. Joh Fredersen is the city's master. His son Freder idles away his time in a pleasure garden, but is interrupted by the arrival of a young woman named Maria, who has brought a group of workers' children to witness the lifestyle of the rich.

Maria and the children are ushered away, but Freder, fascinated, goes to the machine rooms to find her. Freder secretly rebels against Fredersen by deciding to help the workers, after seeing his father's ignorance towards the treatment of the workers.

The inventor Rotwang shows Fredersen a robot he has built to ‘resurrect’ Hel, the woman he loved but who married Fredersen and died in childbirth. They examine maps which show a network of catacombs beneath Metropolis, and the two men go to investigate.

They eavesdrop on a gathering of workers, including Freder. Maria addresses them, prophesying the arrival of a mediator (the heart) who can bring the working (the hands) and ruling classes (the head) together. Freder believes that he could fill the role and declares his love for Maria. 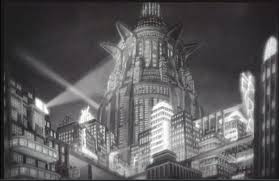 Finding the false Maria urging the workers to rise up and destroy the machines, Freder accuses her of not being the real Maria. The workers follow the false Maria from their city to the machine rooms, leaving their children behind. They destroy the Heart Machine, which causes the workers' city below to flood. The real Maria, having escaped from Rotwang's house, rescues the children with the help of Freder.

The foreman Grot berates the celebrating workers for abandoning their children in the flooded city. Believing their children to be dead, the hysterical workers capture the false Maria and burn her at the stake. A horrified Freder watches, not understanding the deception until the fire reveals her to be a robot.

Rotwang chases the real Maria to the roof of the cathedral, pursued by Freder. The two men fight as Fredersen and the workers watch from the street. Rotwang falls to his death. Freder fulfills his role as mediator by linking the hands of Fredersen and Grot to bring them together.

Reception
Metropolis was met with a mixed reception upon release. Critics found it pictorially beautiful and lauded its complex special effects, but accused its story of naiveté. The film's extensive running time also came in for criticism, as well as its alleged Communist message. Metropolis was cut substantially after its German premiere, removing a large portion of Lang's original footage. Numerous attempts have been made to restore the film since the 1970s.

[adapted from Wikipedia and other sources]

Ann Marie Thomas is the author of three medieval history books, a surprisingly cheerful poetry collection about her 2010 stroke, and the science fiction series Flight of the Kestrel. Book one, Intruders, is out now. Follow her at http://eepurl.com/bbOsyz
Posted by Ann Marie Thomas at 17:22