The Lost World is a novel released in 1912 by Sir Arthur Conan Doyle (who I wrote about last week) concerning an expedition to a plateau in the Amazon basin of South America where prehistoric animals still survive. It was serialised in the popular Strand Magazine April–November 1912. The character of Professor Challenger was introduced in this book. The novel also describes a war between indigenous people and a vicious tribe of ape-like creatures.
Edward Malone, a reporter for the Daily Gazette, asks his news editor, McArdle, for a dangerous and adventurous mission in order to impress the woman he loves, Gladys Hungerton. He is sent to interview the cantankerous Professor Challenger, who has become notorious for claims made about his recent expedition to South America.


The professor has been plagued by intrusive reporters and, being a formidable man of great strength, has taken to forcibly ejecting them, despite the resulting police prosecutions. To gain entry Malone pretends to be an honest enquirer, but is quickly discovered, assaulted and thrown into the street. Although this is witnessed by a policeman, Malone does not press charges as the original deceit was his.

Challenger is suitably impressed, and decides to reveal something of his discovery of living dinosaurs in South America. Malone is invited to a scientific gathering that evening at which he volunteers, along with the biologist Professor Summerlee and the Amazon adventurer Lord John Roxton, to travel to South America to investigate the claims. After a long and arduous journey they reach the plateau. But one of their local guides has a score to settle with Roxton and destroys their temporary bridge across a precipice, trapping the explorers on the dinosaurs' plateau, where he expects them to meet their deaths.

On the plateau, the explorers encounter five iguanodons and are later attacked by pterodactyls, and Roxton finds some blue clay in which he takes a great interest. After numerous encounters with dinosaurs, Challenger, Summerlee, and Roxton are captured by a race of 'ape-men'. While in the ape-men's village, they discover a tribe of anatomically-modern humans (calling themselves Accala) inhabiting the other side of the plateau, with whom the ape-men (called Doda by the Accala) are at war.

Upon return to England, they present their report, which include pictures and a newspaper report by Malone; but they are disbelieved by the public, until Challenger shows a live pterodactyl as proof, which then escapes into the Atlantic Ocean. At dinner, Roxton reveals that the blue clay contains diamonds, about £200,000 worth, to be split between them. Challenger plans to open a private museum, Summerlee plans to retire and categorize fossils, and Roxton plans to return to the lost world. Malone returns to his love, Gladys, only to find that she had married a solicitor's clerk in his absence. He therefore volunteers to join Roxton's voyage.

Adaptations
This story has captured the imagination of many people and been adapted many times. 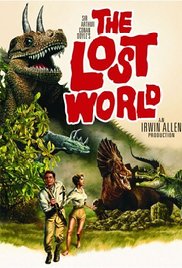 Many other books and films have used The Lost World ideas, particularly the Jurassic Park film and its sequels.

Ann Marie Thomas is the author of three medieval history books, a surprisingly cheerful poetry collection about her 2010 stroke, and the science fiction series Flight of the Kestrel. Book one, Intruders, is out now. Follow her at http://eepurl.com/bbOsyz
Posted by Ann Marie Thomas at 21:12