Lester del Rey (June 2, 1915 – May 10, 1993) was an American science fiction author and editor. He was the author of many books in the juvenile Winston Science Fiction series, and the editor at Del Rey Books, the fantasy and science fiction imprint of Ballantine Books, along with his fourth wife Judy-Lynn del Rey.

Del Rey first started publishing stories in pulp magazines in the late 1930s, at the dawn of the so-called Golden Age of Science Fiction. He was associated with the most prestigious science fiction magazine of the era, Astounding Science Fiction, from the time its editor John W Campbell published his first short story in the April 1938 issue: The Faithful, already under the name Lester del Rey. The December 1938 issue featured his story Helen O'Loy which was selected for the prestigious anthology The Science Fiction Hall of Fame. By the end of 1939 he had also placed stories in Weird Tales and Unknown, which featured more horror and more fantasy respectively. In the 1950s, del Rey was one of the main authors writing science fiction for adolescents (along with Robert A. Heinlein and Andre Norton).

He later became an editor for several pulp magazines and then for book publishers. During 1952 and 1953, del Rey edited several magazines: Space SF, Fantasy Fiction, Science Fiction Adventures (as Philip St. John), Rocket Stories (as Wade Kaempfert), and Fantasy Fiction (as Cameron Hall). Also during 1952, his first two novels were published in the Winston juvenile series, one with an Italian-language edition in the same year. 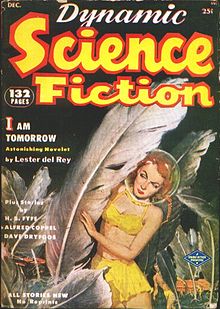 In 1957, del Rey and Damon Knight co-edited a small amateur magazine named Science Fiction Forum. During a debate about symbolism within the magazine, del Rey accepted Knight's challenge to write an analysis of the James Blish story Common Time that showed the story was about a man eating a ham sandwich.

Del Rey was most successful editing with his fourth wife, Judy-Lynn del Rey, at Ballantine Books where they established the fantasy and science fiction imprint Del Rey Books in 1977. After science fiction gained respectability and began to be taught in classrooms, del Rey stated that academics interested in the genre should "get out of my Ghetto." Del Rey stated that


"to develop, science fiction had to remove itself from the usual critics who viewed it from the perspective of [the] mainstream, and who judged its worth largely on its mainstream values. As part of that mainstream, it would never have had the freedom to make the choices it did – many of them quite possibly wrong, but necessary for its development."

For a number of years in the 1970s, Del Rey, himself, helmed the review column for Analog Science Fiction and Fact entitled The Reference Library.

Awards
Del Rey was awarded the 1972 E. E. Smith Memorial Award for Imaginative Fiction (the Skylark) by the New England Science Fiction Association for 'contributing significantly to science fiction, both through work in the field and by exemplifying the personal qualities that made the late "Doc" Smith well-loved by those who knew him.'

He also won a special 1985 Balrog Award for his contributions to fantasy, voted by fans and organized by Locus Magazine. The Science Fiction Writers of America named him its 11th SFWA Grand Master in 1990, presented 1991.

Ann Marie Thomas is the author of three medieval history books, a surprisingly cheerful poetry collection about her 2010 stroke, and the science fiction series Flight of the Kestrel. Book one, Intruders, is out now. Follow her at http://eepurl.com/bbOsyz
Posted by Ann Marie Thomas at 14:37