I don’t know where I got this from, but it’s extremely useful, so I thought it would be good to share. 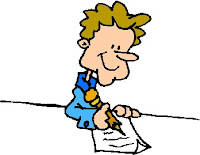 Character Introductions
Show them in action
Show them in conflict
Show them using key skills, attitudes, hobbies etc
Use vivid imagery
Show other characters’ reactions
Make use of setting
Drop some hints about backstory

To sum up: Craft your character introductions to tell us what’s most important about that person.

Ann Marie Thomas is the author of three medieval history books, a surprisingly cheerful poetry collection about her 2010 stroke, and the science fiction series Flight of the Kestrel. Book one, Intruders, is out now. Follow her at http://eepurl.com/bbOsyz
Posted by Ann Marie Thomas at 20:35